Eye on the prize

Whatchamacallit is a masked celebrity on the fourth US season of The Masked Singer.

Whatchamacallit is covered from head to toe in red, white and blue hair and fur. His only plain accessories are light blue gloves and a single eye on his face.

The Whatchamacallit Is Revealed As Lonzo Ball - Season 4 Ep. 8 - THE MASKED SINGER 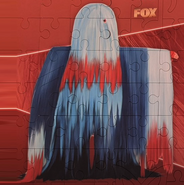