The Masked Singer Wiki
Register
Don't have an account?
Sign In
Advertisement
in: Masks, Costumes, UK Masks,
and 9 more

Viking is a masked celebrity contestant on the second UK series of The Masked Singer.

Viking resembles a big Viking head. He wears a silver Viking helmet with a white bison horns that are black on the end on each side which the celebrity’s head sits under. The face has eyes covered by the helmet. He has a ginger braided moustache below his nose along with a long ginger beard. His entire torso is covered by the beard. He wears dark green pants, brown leather boots, brown leather gloves on each hand, and a red cape at the back. 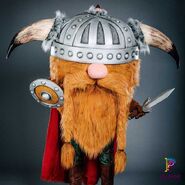 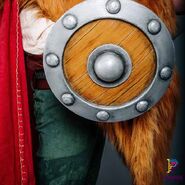