Unicorn is a masked celebrity on the first season of The Masked Singer.

Unicorn wears an all white dress with white fur cuffs, shoulder pads, and an open skirt along with white lace gloves. Underneath the dress, she wears white rhinestoned pants and white boots that resemble hooves. The mask is a unicorn head with a clear horn, and a white mane tied in braids. There is also has a white halo that resembles a snowflake at the back of the mask.

The Unicorn Is Revealed Season 1 Ep. 5 THE MASKED SINGER

You Won't Believe Who's Under The Unicorn Mask! Season 1 Ep. 5 THE MASKED SINGER 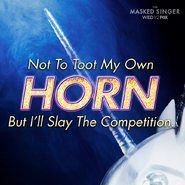 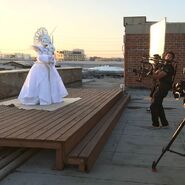 Concept art of Unicorn and Rabbit
Community content is available under CC-BY-SA unless otherwise noted.
Advertisement