The Masked Singer Wiki
Register
Don't have an account?
Sign In
Advertisement
in: Objects, Items, Masks,
and 9 more

Traffic Cone is a masked celebrity contestant on the third season of The Masked Singer UK.

The costume resembles a standard orange and white traffic cone, with a cartoon-style face and facial hair. The contestant's arms resembles black and yellow striped tape. A flashing orange light can be found on top of the traffic cone.

In a similar fashion to Sausage, Traffic Cone has new elements added to his outfit each time he appears. He started to wear a hi-vis jacket in Episode 4, along with a traffic lights necklace in Episode 5, a starry black tuxedo in Episode 6, and a colorful a flower garland with a pair of sunglasses in Episode 7. 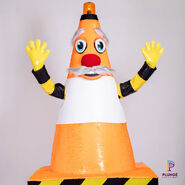 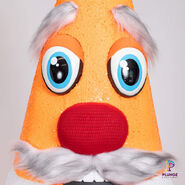