Thingamabob is a masked celebrity on the seventh US season of The Masked Singer.

Thingamabob has lime green fur and wears a blue vest and orange pants, each covered in sequins. His mask has an almost Piranha-like appearance, with two large ears.

Thingamabob during a performance 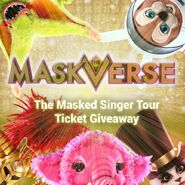