The Masked Singer Wiki
Register
Don't have an account?
Sign In
Advertisement
in: Masks, Costumes, UK Masks,
and 8 more

Swan is a masked celebrity contestant on the second UK series of The Masked Singer.

The Swan wears a short black dress covered in black and red ruffles and a gold collar. Underneath, she wears black patent pants, black glittering boots, and black gloves. There are also black, ruffled swan wings at the back of her costume. The mask is a black swan head with a red beak. The celebrity's head is in a ball of black ruffles below the swan head. 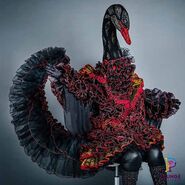 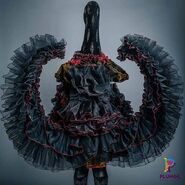