Snow Owls are a masked celebrity duo on the fourth US season of The Masked Singer.

With feathers as white as pure snow and icy-blue eyes, Snow Owls is two for the price of one. Each wears a crown with blue jewels on their heads, and they feather their nest inside an elaborate winged Faberge-style egg.

Preview- This Season Is Taking Flight - Season 4 - THE MASKED SINGER

The Snow Owls First Interview Without The Mask - Season 4 Ep. 7 - THE MASKED SINGER

"But now it's time for a family reunion!" 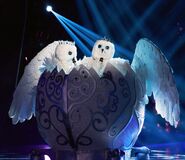 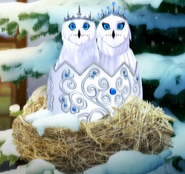 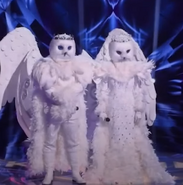 The Snow Owls out of their egg