Serpent is a masked celebrity on the fourth US season of The Masked Singer.

The Serpent's costume is Egyptian themed, with his outfit being made of imitation snakeskin. His outfit is accompanied by a pair of snakeskin boots and a gold necklace. The Serpent's head has a large mouth that the celebrity can see and talk through. Animatronics have been incorporated in the form of six snake tails coming out of the back.

The Serpent Is Revealed As Dr. Elvis Francois - Season 4 Ep. 8 - THE MASKED SINGER

The Serpent's First Interview Without The Mask - Season 4 Ep. 8 - THE MASKED SINGER 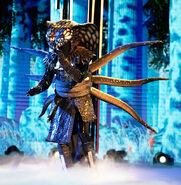