The Masked Singer Wiki
Register
Don't have an account?
Sign In
Advertisement
in: US Season 7, US Seasons, Seasons, 2022

On January 26, 2022, FOX announced that the series was renewed for a seventh season, with a premiere date of March 9, 2022. Alongside that announcement, it was revealed that host Cannon and panelists McCarthy, Jeong, Thicke and Scherzinger would all be returning for the new season.[1]

Concept art of an unused costume. 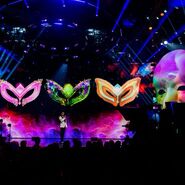 Preview- The Good, The Bad, And The Cuddly - Season 7 - THE MASKED SINGER-2

Preview- Who's Behind The Mask? - SEASON PREMIERE TONIGHT 8-7c - THE MASKED SINGER