The Masked Singer Wiki
Register
Don't have an account?
Sign In
Advertisement
in: US Season 5, US Seasons, Seasons,
and 2 more

On December 2, 2020, FOX announced that the series was renewed for a fifth season and would premiere in the spring of 2021.

On February 8, 2021, it was revealed that host Nick Cannon tested positive for COVID-19 and was sent into quarantine before production started. Niecy Nash, who was formerly a guest judge on the show, was revealed by FOX to be the stand-in for the first half of the season. Executive producer James Breen confirmed, however, that Cannon would return towards the second half.

On February 9, 2021, it was revealed that previous panelists McCarthy, Jeong, Thicke, and Scherzinger would all be returning for the new season. 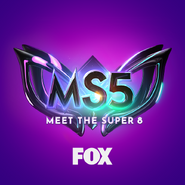