The Masked Singer Wiki
Register
Don't have an account?
Sign In
Advertisement
in: US Season 4, US Seasons, Seasons, 2020

On May 6, 2020, FOX announced that the series was renewed for a fourth season with a targeted fall 2020 premiere.[1][2][3] On July 29, 2020, the first teaser for the season was released, airing during the Ultimate Tag season finale that same night. Along with the teaser, it was announced that they were hoping to begin production within the next six weeks in order to premiere the season in September, however, with a possibility of production being delayed or impacted due to the coronavirus pandemic.[4][5]

On July 7, 2020, it was revealed that host Cannon and panelists McCarthy, Jeong, Thicke, and Scherzinger would all be returning for the new season.[6]

On August 19, 2020, it was revealed that the audience would not be in-person, instead, with a virtual audience over Zoom.[7] A similar virtual audience was already utilized on season 15 of America's Got Talent.[8][9] Production resumed the next day at Red Studios Hollywood instead of Television City where the previous three seasons had filmed.[10]

On November 9, 2020, it was announced that Niecy Nash, Cheryl Hines, Jay Pharoah, and Craig Robinson would serve as guest panelists for future episodes, with Pharoah in a special episode airing on Thanksgiving night and Robinson in the "Super Six" episode aired on December 2.[15] A holiday sing-along special aired on December 9.[16]

In July 2020, host Nick Cannon made controversial, racist, and antisemitic comments in an episode of his "Cannon's Class" podcast series with Professor Griff. He was later fired by ViacomCBS[17] and had his upcoming talk show pushed.[18]

On July 15, 2020, FOX announced that he would remain as host of The Masked Singer, stating they would, "move forward with Nick and help him advance this important conversation, broadly."[19][20][21][22] Cannon also apologized for his comments.[23]

Concept art of all season 4 costumes, including an unused costume between Crocodile and Seahorse. This costume would later be Mother Nature in season 6. 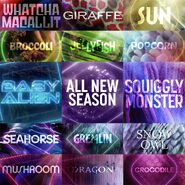