Season 2 of The Masked Singer Brasil premiered on January 23, 2022.

Announcement of Tatá Werneck as a new panelist 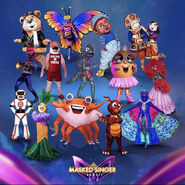