The Masked Singer Wiki
Register
Don't have an account?
Sign In
Advertisement
in: Masks, Costumes, US Masks,
and 8 more

Raven is a masked celebrity on the first season of The Masked Singer.

The Raven wears a black shirt that has black accents on one sleeve and a diagonal hem line with metal panels. The shirt is accompanied by matching pants. The mask resembles a raven's head with grayish designs. The costume also comes with a cage surrounding the back of her head with a raven's nest on top of it.

The Raven Is Revealed Season 1 Ep. 6 THE MASKED SINGER

You Won't Believe Who's Under The Raven Mask! Season 1 Ep. 6 THE MASKED SINGER 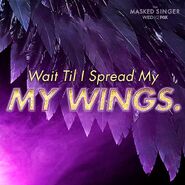