Nothing she can't fix

Pufferfish is a masked celebrity contestant on the sixth US season of The Masked Singer.

The Pufferfish costume consists of a salmon pink/nude colored trumpet gown with turquoise accents and bubble details, covered in jewels. Numerous turquoise ombre fins are positioned on the dress. The sleeves feature a strip of nude pleated fabric. The mask itself, is that of a turquoise pufferfish, with over-sized lips and eyes and large fin out the back with cascading fabric. 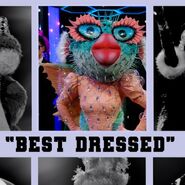