Poodle is a masked celebrity on the first season of The Masked Singer.

Poodle is a white dog with pink fluffy accents. She wears a white coat with black lines and white fringes tinged with pink. Her high heels have a similar pattern. The mask itself is a geometric rendition of a dog with black diamonds representing the eyes and nose; three big poofs can be seen on the top and both sides. Her gloves are grey and sparkly.

The Poodle Is Revealed Season 1 Ep. 4 THE MASKED SINGER

You Won't Believe Who's Under The Poodle Mask! Season 1 Ep. 4 THE MASKED SINGER 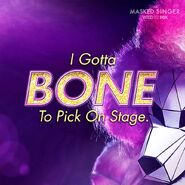 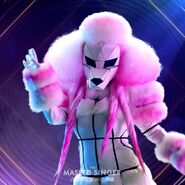 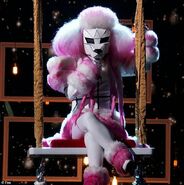