Pineapple is a masked celebrity on the first season of The Masked Singer.

The pineapple has a big head that wears sunglasses and also has a green-ish straw with a blue umbrella top. He wears a blue shirt with green & purple flowers. He also has a parrot on his shoulder. The pineapple also has a human body six pack. He also wears dark blue shorts with white. He has yellow feet and gloves along with black n' white flip flops.

Pineapple sings "I Will Survive" - THE MASKED SINGER - SEASON 1

The Pineapple Is Revealed Season 1 Ep. 2 THE MASKED SINGER

You Won't Believe Who's Under The Pineapple Mask! Season 1 Ep. 2 THE MASKED SINGER 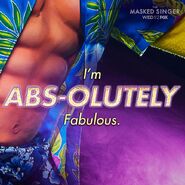