Pepper is a masked celebrity contestant on the sixth US season of The Masked Singer.

The Pepper costume features a fire-inspired colour palette, and consists of a dress, adorned with jewels across the torso and sleeves, and a skirt, that appears to be made bunches of red tulle. The costume also features orange boots laced all the way up the thigh.

The mask itself, resembles the top of a chilli pepper. It has a large grin and bright blue eyes, similar to that of Jalapeño from the second season of ¿Quién es la máscara?. The stem of the pepper features two leaf-like strands, resembling hair. 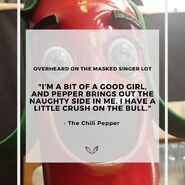 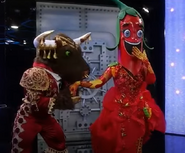