The Masked Singer Wiki
Register
Don't have an account?
Sign In
Advertisement
in: Masks, Costumes, MX Masks,
and 10 more

Lives in the present

Panda is a masked celebrity on the first season of ¿Quién es la máscara?.

It was later revealed that the celebrity underneath the mask was Alejandro Suárez.

Panda wears a brown astronaut suit that covers the entire body. In his backpack he is carrying bamboo. The mask has white fur, with black around the eyes, and a grayish long beard. 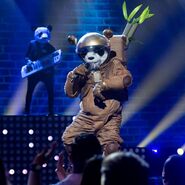 Panda sings in his first and last performance.
Community content is available under CC-BY-SA unless otherwise noted.
Advertisement