Octopus is a masked celebrity contestant on the sixth US season of The Masked Singer.

The Octopus has indigo skin and tentacles, gold eyelids, and a large white smile. He wears an indigo fur coat, a matching fedora, black round-rimmed sunglasses, and a bright purple suit topped with a gold chain. There are two tentacles on the right side of his coat, ten tentacles on his hands as a substitution for fingers, and even a few poking out of his fedora.

The Octopus is Revealed! - Season 6 Ep. 1 - THE MASKED SINGER 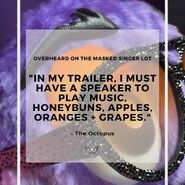