Mother Nature is a masked celebrity contestant on the sixth US season of The Masked Singer.

Mother Nature has a brown body that resembles tree bark, as well as green lips and eyes. Her hair is made of leaves and vines and has glowing flowers all over it. She wears a green dress that has vines, leaves, and glowing flowers decorated all over and brown boots. She wears a removable back piece that has branches and flowers.

Who Is Behind The Mask Of Mother Nature? - THE MASKED SINGER

Concept art for the season four costumes, with Mother Nature shown on the bottom left

Close-up of the season four concept art for Mother Nature 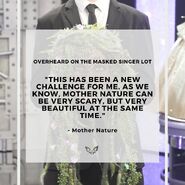 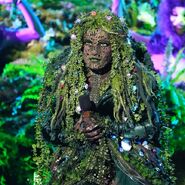