Monstro is a masked celebrity on the first brazilian season of The Masked Singer.

Monster is a blue with some purple stains monster with a big blue eye and brown feet, he has a purple mohican. 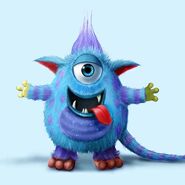