Monster is a masked celebrity on the first season of The Masked Singer.

Monster's body is shaped like a cylinder with aqua fur. He has two hands with claws on each hand. He only has one eye colored green with a black pupil. He has a smiling mouth with a purple tongue and two rectangular white teeth. He has two curved horns with specks of blue, purple and yellow on them. His legs are white and blue.

The Monster Is Revealed Season 1 Ep. 10 THE MASKED SINGER

You Won't Believe Who Is Under The Monster Mask! Season 1 Ep. 10 THE MASKED SINGER 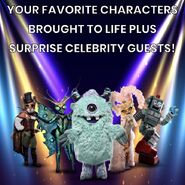 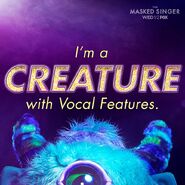 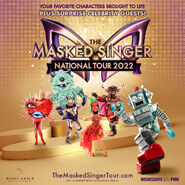