Minotauro (translated as Minotaur) is a masked celebrity on the first season of ¿Quién es la máscara?.

Minotauro dresses like a rocker with a brown leather jacket, pants and boots. The mask is a bull's head with golden piercings.

Minotauro sings in his third performance. 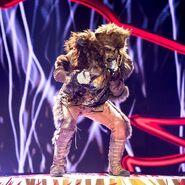 Minotauro sings in his fifth performance.
Community content is available under CC-BY-SA unless otherwise noted.
Advertisement