Marciano (translated as Martian) is a masked celebrity on the first season of ¿Quién es la máscara?.

It was later revealed that the celebrity underneath the mask was José Manuel Figueroa.

Marciano wears a metallic space suit mainly in purple, except for his wrists and boots which are blue, and his black pants. On his chest he wears a kind of silvery respirator. The mask is an alien's head inside a space helmet from which its tentacles protrude. 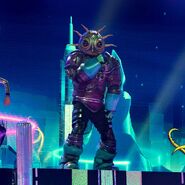 Marciano sings in his first performance. 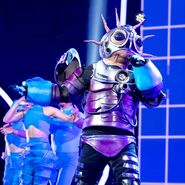 Marciano sings in his third performance.

Marciano sings in his fourth performance.
Community content is available under CC-BY-SA unless otherwise noted.
Advertisement