Lips is a masked celebrity on the fourth US season of The Masked Singer.

The Lips sports a large mouth with red lips. The contestants arms are seen poking through the black mouth of the costume. Also that, she wears a black sequin geometric jumpsuit with leather gloves and sequin geometric socks.

The Lips Is Revealed As Wendy Williams - Season 4 Ep. 5 - THE MASKED SINGER

The Lips First Interview Without The Mask - Season 4 Ep. 5 - THE MASKED SINGER

Wendy On ‘The Masked Singer’! 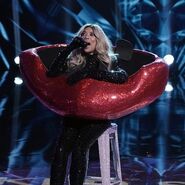