Ladybug is a masked celebrity contestant on the second US season of The Masked Singer.

The Ladybug's costume consist of a standard black mask with two red eyes and red lips. Behind the head of the mask is a shell similar to a helmet with two long black ponytails coming out of it. The outfit is a sparkly red gown with black gloves and ladybug motifs. Two thin black legs resembling that of an insect, can be seen coming out of the front.

The Ladybug Is Revealed As Kelly Osbourne Season 2 Ep. 7 THE MASKED SINGER

The Ladybug Is Unmasked It's Kelly Osbourne! Season 2 Ep. 7 THE MASKED SINGER 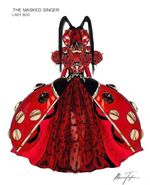 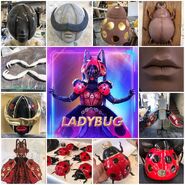 Images of the-making-of Ladybug, including concept art of the costume