Jellyfish is a masked celebrity on the fourth US season of The Masked Singer.

The Jellyfish Is Revealed As Chloe Kim - Season 4 Ep. 10 - THE MASKED SINGER 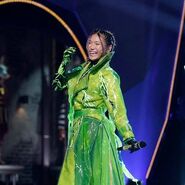