The Masked Singer Wiki
Register
Don't have an account?
Sign In
Advertisement
in: Masks, Costumes, US Season 7 Masks,
and 16 more

Hydra is a masked celebrity duo on the seventh US season of The Masked Singer.

The Hydra is a blue and green three-headed dragon, each head with a unique set of colored eyes. The head on the left has magenta eyes, the middle head has neon orange eyes, and the head on the right has emerald green eyes. The costume also features 3 legs and 2 arms.

In week 5, they wore bow ties, meant as a nod to their song “Sharp Dressed Man.” The head on the left wore a pink bow, the middle one wore a green bow, and the one on the right wore a red-orange bow. 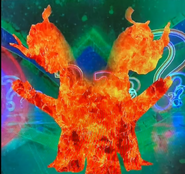 Silhouette of the mask