The Masked Singer Wiki
Register
Don't have an account?
Sign In
in: Masks, Costumes, US Masks,
and 10 more

Edit
watch 01:23
Wiki Targeted (Entertainment)
Do you like this video?
Play Sound

Hippo is a masked celebrity on the first season of The Masked Singer.

Hippo has black glasses and a nice silver mist hat, along with a silvery and black coat and boots, orange shorts, black shirt and his iconic golden tooth.

The Hippo Is Revealed Season 1 Ep. 1 THE MASKED SINGER

You Won't Believe Who's Under The Hippo Mask! Season 1 Ep. 1 THE MASKED SINGER 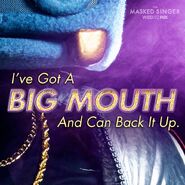 Hippo during his performance
Community content is available under CC-BY-SA unless otherwise noted.