The Masked Singer Wiki
Register
Don't have an account?
Sign In
Advertisement
in: Masks, Costumes, UK Masks,
and 10 more

Harlequin is a masked celebrity contestant on the second UK series of The Masked Singer.

Harlequin wears a large yellow royal oversized gown with red, gold, and checkered panels, with a gold fringe trim along the hem. The mask is inspired by the Venetian Carnival and is decorated with yellow and orange patterns and gold accents. The mask also has an orange and checkered collar coming out of the back of the mask. 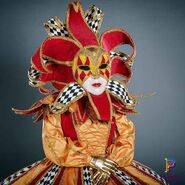 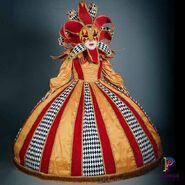