The Masked Singer Wiki
Register
Don't have an account?
Sign In
Advertisement
in: US Masks, US Season 5, US Season 5 Masks,
and 10 more

Grandpa Monster is a masked celebrity contestant on the fifth US season of The Masked Singer.

Grandpa Monster is the older version of his counterparts - Monster and Miss Monster. He is an orange monster with orange, gray and black horns and green claws. He has a grey beard, wears a yellow and light green flat cap, and wears orange and black glasses. He walks around with a walker with tennis balls on the bottom. In his second performance, it is shown that he has a bald spot underneath his flat cap.

The Grandpa Monster Is Revealed! Who's Behind The Mask? - Season 5 Ep. 4 - THE MASKED SINGER 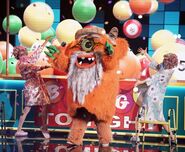