The Masked Singer Wiki
Register
Don't have an account?
Sign In
Advertisement
in: Masks, Costumes, UK Masks,
and 9 more

Grandfather Clock is a masked celebrity contestant on the second UK series of The Masked Singer.

Grandfather Clock has a rectangular head, he has a symmetrical design on top with little gears. He has a tan fence with blue and red stripes, the clock part is white and outlined in green, he has human facial features, including grey eyebrows, brown eyes, a nose, a grey moustache, and an open mouth, his hands are pointing at 3:45. He has a body with the same pattern as the head, a gold pendulum, tan and brown striped sleeves, and brown gloves. He has 3 brown belts on his waist, brown, tan, and green striped pants, tan rectangular shoes with brown rectangles. He also has shoulder pads with gold tassels on the edge, and gold tassels on the edge of his shoes. 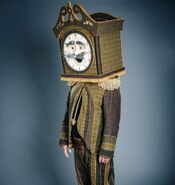 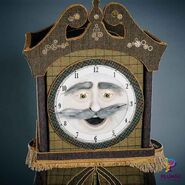 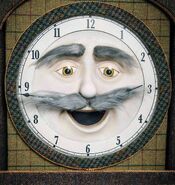 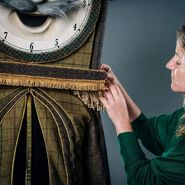 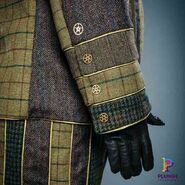