The Masked Singer Wiki
Register
Don't have an account?
Sign In
Advertisement
in: Masks, Costumes, MX Masks,
and 11 more

Gallo (translated as Rooster) is a masked celebrity on the first season of ¿Quién es la máscara?.

It was later revealed that the celebrity underneath the mask was Moisés Muñoz.

Gallo is a harlequin, he wears a white breastplate and thighs with black details. His feet and claws are golden in color. The mask is a rooster's head made of gemstones. 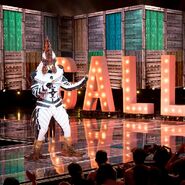 Gallo sings in his first and last performance.

Gallo appears again with a new masked celebrity on the special season one mini-program of ¿Quién es la máscara?.

It was later revealed that the new celebrity underneath the mask was Juan Pablo Gil.