The Masked Singer Wiki
Register
Don't have an account?
Sign In
Advertisement
in: Masks, Costumes, THAI Masks,
and 8 more

Durian (หน้ากากทุเรียน / Na-Gak Thu-Rian) is a masked celebrity and the Winner of the first Thailand season of The Masked Singer.

Durian wears a green-tartan suit with thorns at the arms and thorny bright green gloves. His mask is a piece of durian shell with long brown stem and two leaves on the head. 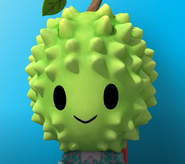