The Masked Singer Wiki
Register
Don't have an account?
Sign In
Advertisement
in: Masks, Costumes, UK Masks,
and 11 more

Dragon is a masked celebrity contestant on the second UK series of The Masked Singer.

Dragon takes on a more cartoony look. She has jade green skin, gold horns, vivid blue eyes, a lime nose, and a smile with two fangs. Her front has a rainbow gradient that goes from below her neck down to in between her legs. She also has scaly arms and legs, gold wings, and feet with gold claws. Also She has two smoke machines embedded inside the costume. One in the nose of the mask and another below the tail.

Dragon with Rita Ora and Alien 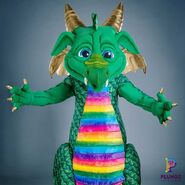 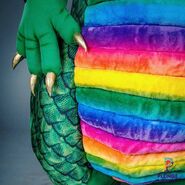