Deer is a masked celebrity on the first season of The Masked Singer.

Deer wears a red shirt and dark green pants underneath a green coat. His hands are covered with orange gloves and golden sleeves with gears. The mask itself is modeled after a gas mask with antlers coming out of the top to resemble a deer.

Deer sings "Get Your Shine On" - THE MASKED SINGER - SEASON 1

The Deer Is Revealed Season 1 Ep. 3 THE MASKED SINGER

You Won't Believe Who's Under The Deer Mask! Season 1 Ep. 3 THE MASKED SINGER 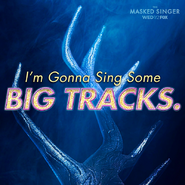