The Masked Singer Wiki
Register
Don't have an account?
Sign In
Advertisement
in: Masks, Costumes, US Masks,
and 18 more

Crocodile is a masked celebrity contestant on the fourth US season of The Masked Singer.

In the promotional photo, the Crocodile's color is magenta, rather than the natural green. He wears a pink bowler hat, a magenta blazer with a big bow tie, rose-colored pants and gloves, and a big tail. The contestant's scales can be seen on both the mask, gloves, and the tail.

In the official photo, some of the Crocodile's prominent features can still be seen. He now wears a big pink fur coat, and their blazer is lighter in color. His tail is hidden in this photo.

The Clues- The Crocodile - Season 4 Ep. 2 - THE MASKED SINGER

The Crocodile Is Revealed As Nick Carter - Season 4 Ep. 12 - THE MASKED SINGER

The Crocodile's First Interview Without The Mask - Season 4 Ep. 12 - THE MASKED SINGER 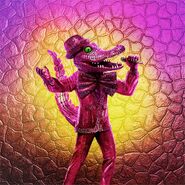 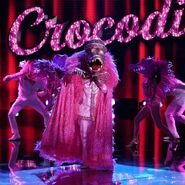 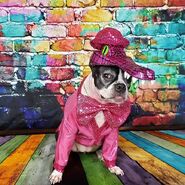 Costume model as shown in the Fox TV Fan Hub 2021