Ciervo (translated as Deer) is a masked celebrity on the first season of ¿Quién es la máscara?.

It was later revealed that the celebrity underneath the mask was Johnny Lozada.

Ciervo wears a grey checked suit with red stains, a white shirt and a black tie. On his head he wears a grey mask with red and white pearls. In total, the character has four thousand swarovski. 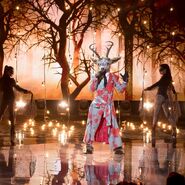 Ciervo sings in his first and last performance.
Community content is available under CC-BY-SA unless otherwise noted.
Advertisement