Catrina (referring to Catrina) is a masked celebrity on the first season of ¿Quién es la máscara?.

It was later revealed that the celebrity underneath the mask was Rocío Banquells.

Catrina wears a purple dress with a red heart in the middle and flowers on the shoulders, black leather pants and shoes. The mask features "sugar skull" make-up, and is surrounded by flowers and a golden halo. 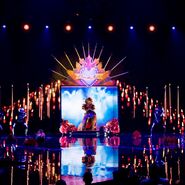 Catrina sings in her first performance.
Community content is available under CC-BY-SA unless otherwise noted.
Advertisement