Caterpillar is a masked celebrity contestant on the sixth US season of The Masked Singer.

The Caterpillar appears to be a fuzzy caterpillar with yellow and purple coloured fur. This twelve-legged critter has a yellow and purple body, segmented with hot pink fringe, and adorned with cyan circular shapes on the sides. The Caterpillar mask itself, features a headset, a set of fuzzy antennae and toothy grin, with braces on the two front teeth. It is also trimmed with the same pink fur and cyan accents as the body.

Caterpillar Performs "If I Were A Boy" By Beyoncé - Season 6 Ep. 5 - THE MASKED SINGER 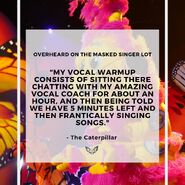 Caterpillar performing "If I Were a Boy"