The Masked Singer Wiki
Register
Don't have an account?
Sign In
Advertisement
in: Article stubs, Masks, Costumes,
and 11 more

Bush Baby is a masked celebrity contestant on the second UK series of The Masked Singer.

Bush Baby resembles an actual baby. He has a tan head with brown around his eyes, metallic mouth with a pink nose and whiskers, he also has spiky ears. He wears a yellow onesie with different colored building blocks with a pouch and it is covered in tiny yellow jewels. He also has a yellow necklace with a little stuffed orange and purple butterfly, ladybug, a pink pacifier, and a stuffed blue and cyan snail. 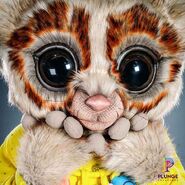 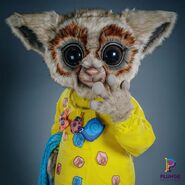