Beach Ball is a masked celebrity duo on the sixth US season of The Masked Singer.

The Beach Ball is a giant ball with red, white and blue like a normal beach ball would be. They have orange eyebrows, eyes with lashes, red lips, and blue eyes. They are on a sandy base which has a seagull, starfish and other beach items.

Who Is Behind The Beach Ball Mask? - Season 6 Ep. 8 - THE MASKED SINGER 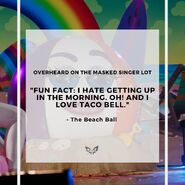