Banana Split are a masked celebrity duo contestant on the sixth US season of The Masked Singer.

Similar to season three's Banana, the Banana is wearing a yellow suit that is somewhat covered in dripping chocolate ice cream and sprinkles. The Banana mask itself, features heart eyes and a smile.

The Split appears to be heavily inspired by Marilyn Monroe. The costume consists of a silver bodysuit, with an ice cream layered dress, dripping chocolate sauce.

The mask itself resembles a scoop of strawberry flavored ice cream, with vanilla ice cream for hair and a cherry on top. The mask features large feminine eyes and lips. On top of the bodysuit, the contestant wears a dress made from different scoops of ice cream..

The Clues- Banana Split - Group B Finale - THE MASKED SINGER

Concept art for both costumes of Banana Split, shown in the sneak peek special 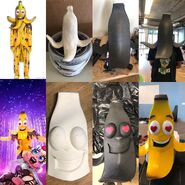 Images of the-making-of the banana portion of Banana Split, including concept art of the costume

Banana Split as seen in the trailer for season 6 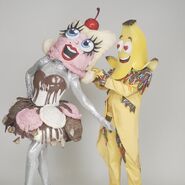 Behind-the-scenes of Banana Split in a photoshoot 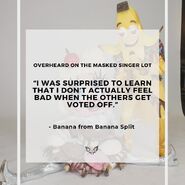