Banana is a masked celebrity on the third US season of The Masked Singer.

The Banana simply wears a large jumpsuit in the shape of a peeled banana, as well as yellow gloves and brown shoes with yellow laces. He has large, exaggerated, circular eyes and straight, brown eyebrows.

A Different Type Of Banana Pancake Season 3 THE MASKED SINGER

Banana vs. Rhino FACE-OFF! Two Great Vocalists THROW DOWN on @The Masked Singer

The Banana Is Revealed As Bret Michaels Season 3 Ep. 13 THE MASKED SINGER

The Banana's First Interview Without The Mask Season 3 Ep. 13 THE MASKED SINGER 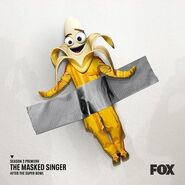 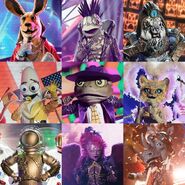 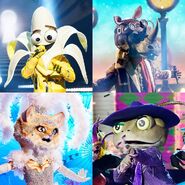