The Masked Singer Wiki
Register
Don't have an account?
Sign In
Advertisement
in: Masks, Costumes, UK Masks,
and 12 more

Badger is a masked celebrity contestant on the second UK series of The Masked Singer.

Badger is dressed like a biker. He has matching orange elbow pads, kneepads, shoulder pads, and a helmet but with silver spikes. He has a half unzipped biker jacket with embroidered patches of a badger outlined in red with the text "Moves Like Badger, 2020", a badger profile with a crown with wings and text that says "Dig Free" with 5 red stars at the bottom, a gold medal saying "Badger of honor" on the left of their jacket, and a banjo with wings outlined in green and a checkered pattern across on the right. Black leather pants with a belt that has silver spikes, and silver chains. Finally, he has boots with belts identical to the one on his waist.

Badger with Jonathan Ross and Robin 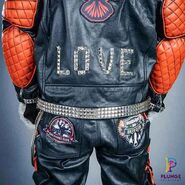 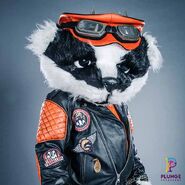