Baby is a masked celebrity contestant on the sixth US season of The Masked Singer.

Baby has fair skin with big ears and big, blue eyes, as well as only one tooth in his mouth, and a tuft of curly, blond hair. He wears a yellow onesie with blue stripes, a matching bonnet, and a bib that says, "Baby's First Show!". His microphone is a baby bottle.

Baby Performs "My First My Last My Everything" By Barry White - Season 6 Ep. 2 - THE MASKED SINGER 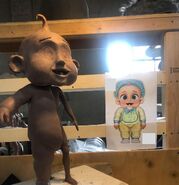 Image of the-making-of Baby, including concept art of the costume 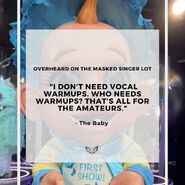 Baby portrayed as a giant 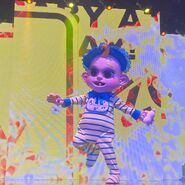