Alien is a masked celebrity on the first season of The Masked Singer.

Alien is a greenish/yellowish humanoid alien with red eyes and antennae. Her spacesuit is red with accents of magenta. Her boots are silver, and she has a glossy cape. A headdress behind her looks like a hypnotic swirl pattern, a reference to mind control in aliens.

Alien sings "Feel It Still" by Portugal. The Man - THE MASKED SINGER - SEASON 1

The Alien Is Revealed Season 1 Ep. 7 THE MASKED SINGER

You Won't Believe Who's Under The Alien Mask! Season 1 Ep. 7 THE MASKED SINGER 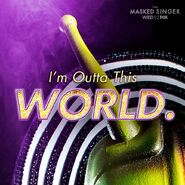