The Masked Singer Wiki
Register
Don't have an account?
Sign In
Advertisement
in: Masks, Costumes, UK Masks,
and 11 more

Alien is a masked celebrity contestant on the second UK series of The Masked Singer.

Alien first wears a blue bodysuit that resembles alien skin. Over that, Alien wears a futuristic and geometric dress made entirely of mirrors. Along with that, Alien wears black gloves and shoes with that. The mask is an blue alien head with big eyes, a long nose, and human lips. There are also tentacles coming out of the forehead that drape down to the legs

Alien with Rita Ora and Dragon 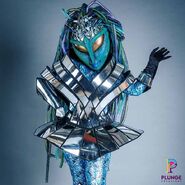 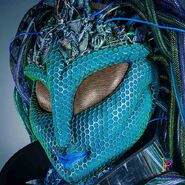